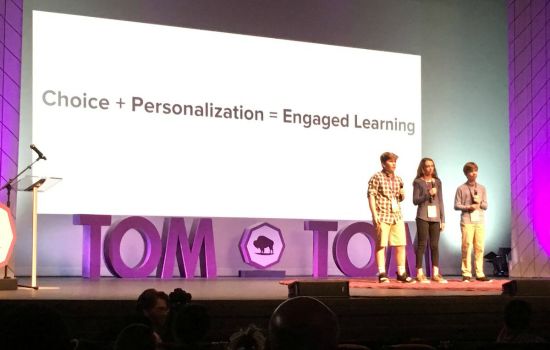 When Sophie Gangemi '24, Jack Krupnick '24, and Max Buford '23 stepped on stage at the Paramount Theatre on April 9, they were the first St. Anne's-Belfield Grades 5 – 8 students to do so at a Tom Tom Festival Youth Innovation Summit. Participating in the "Reinventing Middle School Challenge," the three were supported by five other students in the "Can We Reimagine Middle School" Quest, and focused on how changing assessments away from testing knowledge and towards tracking personal growth would transform a middle school experience.

"At the beginning of class, the teacher would pose multiple questions that are open-ended," explained Buford of the class structure the team proposed. "The students would then be able to choose which questions they wanted to answer, and they'd have to do research about the topic."

"It would be an exploration," agreed Gangemi. "Tests would be more about seeing growth, and much less stressful."

"And it would feel more about learning than getting good grades," added Krupnick.

Sponsored by the Manning Family Foundation, ReinventED Lab, and U.Va. Curry School of Education, the challenge had a total of three teams participating and all produced such interesting ideas that the official competition was declared a three-way tie.

For the Quest team, the ideal class that they described in many ways mirrored their actual experiences of the Grades 7 & 8 Quest classes designed around questions that students then answer throughout trimester-long explorations led by the students themselves.

"Quests are a nice way to have a different class and change it up every once in a while," said Gangemi. "And plus I feel like each is about things you need to know, but don't necessarily always get to learn in school. In my last Quest, 'How It Works,' we learned how to use a drill and how motors worked, things like that that aren't necessarily part of science class or math class but I still got to learn it at school."

How It Works, led by eighth grade students Max Buford and Carter Lang, is just one example of classes designed and offered by students, with the explorations then led by those participating in the Quest.

"We move around a lot in Quests," said Krupnick. "They're usually really hands on and we can do more. It's a nice change from the rest of the day."