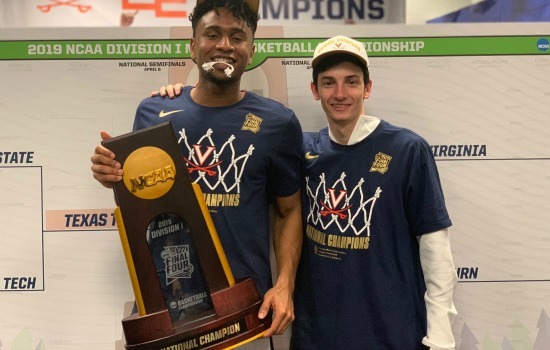 Jayden Nixon '17 and Matt Palumbo '17 helped make University of Virginia Men's Basketball history on April 8 as part of the program's first NCAA Championship win. It was also the team's first appearance in a National Championship game.

Nixon, a walk-on, and Palumbo, a team manager, played together during their high school careers and cheered on the Hoos.

"I've been watching Coach Bennett coach UVa for the past ten years, so being able to be a part of his great program, and his dynasty at UVa basketball, is a real blessing," Nixon told NBC 29 earlier in the week.

"To be able to come to a team like this, and be servants for the team, in whichever way possible. To see the fruits of our labor come to fruition has been great."