Feinberg Discusses the Art of Science with School, Community 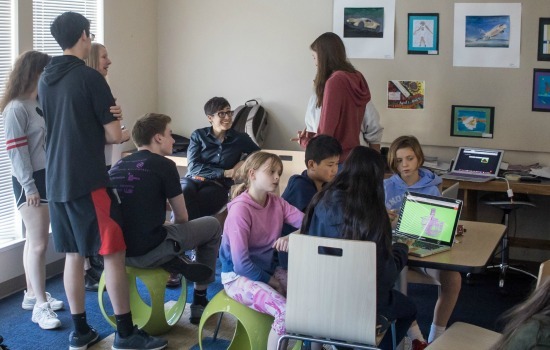 Danielle Feinberg, director of photography for lighting at Pixar Animation Studios, visited the School on April 15 as part of the Booth Family Inspiration Speaks Series. Feinberg, a native of Boulder, Colorado, began her career at Pixar in 1997 working on the film A Bug's Lifeand went on to light on many feature films including Toy Story 2, Monsters, Inc., the Academy Award®-winning Finding Nemo, The Incredibles, and Ratatouille. Feinberg was the director of photography for lighting on Pixar's Academy Award®-winning films WALL-E , Brave, and Coco.

Throughout the day Feinberg engaged with hundreds of community members in a variety of settings. Following a tour of the Learning Village, which included several stops to see computer science in action in a variety of classrooms, Feinberg spoke with the entire Upper School about The Art of Science: Bringing Imagined Worlds to Life. By discussing the math and technology that renders Pixar worlds realistic, and weaving in stories from her own life including the decision to study her hobby, computer science, at Harvard University, Feinberg was able to show students and faculty that every day, in a variety of ways, everyone engages in storytelling.

"Confidence comes from putting your all into something," she reminded the School audience. "If you do the work associated with what you love, and you keep going, one day you'll find that you're not in a world that just is... but rather, one that you brought to life."

A tour of the Upper School and a chance to work with Mr. Zach Minster's computer science students followed the presentation, before Feinberg joined Co-Coordinator of the Computer Science Initiative Kim Wilkens for an afternoon coding workshop with middle school girls from across the area.

In the evening, Feinberg addressed an audience of nearly 200 in Grisham Hall. She discussed that in lighting for animation she is not trying to recreate a scientifically correct world, but rather create a world that audience members can immerse themselves in. It was during a computer graphics class at Harvard University that that all of the math and science she had been learning could come together to create a world, a discovery she described as "pure magic."

"The ability to breathe life into an imagined world is something I've never really gotten over," she said.

Following her presentation, Feinberg took questions from the audience ranging from the research trips that Pixar staff take before beginning their work on a new movie to the production process of animated films to "Easter eggs" in different movies to her own favorite animated films.

Feinberg's visit to the School was made possible by the Booth Family Inspiration Speaks series which, now in its fourth year, has featured extraordinary thought leaders and change-agents who have inspired and challenged our broader School and the Charlottesville community with their experiences, insights, and new approaches. The series was named last year through an endowed fund provided by generous donors to honor Rich and Roxanne Booth and their family for their dedication, vision, and inspiration to our School.