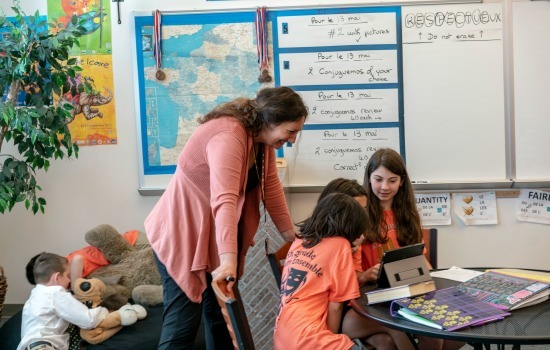 Google Translate had long been a headache for language instructors. Poor grammar, surprising synonyms, and a lack of nuance were just a few of the challenges that faced users. However, in the past few years greater interaction and better artificial intelligence have made it a more worthwhile endeavor. So much, in fact, that St. Anne's-Belfield School's Ms. Karine Boulle, Grades 5 – 8 French teacher, and Ms. Alexa Chumpitaz, a University of Pennsylvania Fellow in Grades 5 – 8 languages, set out to integrate it into their classes in much the same way the calculator has become an embraced tool in mathematics.

"When I went to college Google Translate was this huge, known honor violation," recounted Chumpitaz. "But when I traveled, I found myself Googling things really quickly and the first thing that would come up was Google Translate... it was just a tool."

The pair decided to experiment with bringing Google Translate into their sixth grade French classes, with the intention of helping students realize the limits of the service as well as the value. Students created fictional families based on celebrities or historical figures, and wrote about them using vocabulary and verbs that had been studied in class. They wrote in English, then used Google Translate to translate it into French.

"The kids had to realize what knowledge they had and how they could use it," said Chumpitaz. "They had to reflect on their understandings of language in order to get an output of French words that they knew, words that we had studied and verbs that we had studied. Such a thinking process requires a solid grasp of both French and English grammar and it's exciting that we were able to structure this for them."

The second part of the assignment involved students presenting their celebrity families without notes.

"The process shifted," said Boulle. "They were learning because they were correcting what Google Translate gave them. Some of the kids realized that what they wrote in English was way over their head in French, so they had to simplify. So each was able to write and learn at their own level. . . It was a very easy way of differentiating that was student-led."

Throughout the assignment, students devised a rubric of what should be noted in each presentation. Pronunciation, grammar, and comprehension all became parts of the final grades.

"What was really cool was that when Google did not translate properly, the kids still learned through their editing process. The shift came in correcting Google instead of correcting their own mistakes, therefore allowing students to accept mistakes better and learn from them," said Boulle.

Following their projects, the use of Google Translate as part of an assignment became permissible under the Honor Code.

"Google Translate is this beast that we should embrace rather than fight," said Boulle. "But just like spell check, students need to learn how to use it to their advantage, as a teaching tool and not a cheating tool."