St. Anne's-Belfield School, the product of the merging of several strong academic traditions, has a rich heritage reaching back to the opening of The Albemarle Female Institute in 1856. The goal of its founders was to provide for their daughters the excellent academic opportunities offered to their sons by the University of Virginia. Their goal was revitalized in 1910 when the Reverend Henry B. Lee, Rector of Christ Episcopal Church, persuaded members of his vestry to purchase the Institute. Reopened as St. Anne's School, it became part of the Episcopal diocesean school system and continued at its downtown location until 1939, when it was moved to Greenway Rise, the present Upper School campus.

Like St. Anne's, the coeducational elementary school's origins were downtown, where in 1911 Miss Nancy Gordon opened a primary school and soon moved it to Stonefield, her home at the end of Rugby Road. After Miss Nancy's death, it was merged with University Country Day School (the Bellair School). The product, Belfield, built in 1956, retained the earmarks of its predecessors: strong academics, an inclusive student government and active parental involvement. That land is now the site of the Learning Village, housing our Pre-School through eighth grade students, as well as most of our athletic facilities.

In 1975, after a five-year trial period, St. Anne's and Belfield officially merged. Their combined legacy of high academic standards and enduring tradition enrich the lives of our students today. While the merged school became only loosely associated with the diocesan school system in 1975 and totally independent ten years later, an honor system and weekly Chapel services have continued to be a cornerstone of our school life. Service to the local community promotes the same awareness for social and global issues as did rolling bandages for the war effort in the '40s. Our graduates, many of them sons and daughters of alumni, continue to attend the nation's finest colleges. Under strong leadership, St. Anne's-Belfield values the same high academic standards today which motivated its founders in the mid-19th century and have been at its core in the intervening years. 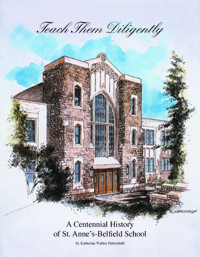 Published in 2010 during the school's Centennial year, Teach Them Diligently traces the history of St. Anne's-Belfield School through the people that have populated its classrooms and hallways for one hundred years.

A hardcover book of 320 pages and 400 photos, it was written by Kay Walker Butterfield, currently the School's archivist and historian.

To order your copy today, please contact the Office of Development & Alumni Relations.